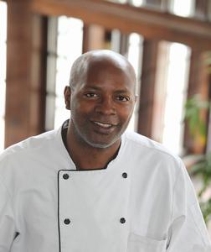 Travis Brown grew up in a big family in Camden, Delaware where he was surrounded by a family of Chefs. His father played a major role in his love and interest for cooking. During family reunions he was introduced to traditional southern food. When Travis was in high school he participated in a cooking contest which led him to a full scholarship to Johnson & Wales University. As a result of the contest Travis was thankful enough to land in second place, for the entire state of Delaware. Travis graduated from Johnson & Wales University in 1989 with Associates degree in Culinary Arts. He did seasonal work in St. John and Sanibel Island where he gained an immense amount of professional experience. Working in the islands offered new experiences’ in Caribbean and exotic styles of cooking.Over the years Travis has gained great knowledge and experience in management, customer service, employee relations, recruitment, networking and public relations. He has been working as an Executive Chef for years, managing a large staff, completing multiple simultaneous projects as well as being detail oriented, well organized and a self-starter with lots of energy and initiative. In addition Travis is proud to be the “Award Winner Clam Chowder of Essex, Ipswich & Haverhill 2009, 2010 &2012.”